`Awa is one of the plants brought in their sailing canoes by the earliest Polynesian voyagers arriving in Hawai`i. `Awa (Piper methysticum, pronounced ah-vah with the "w" as a "v" sound), a member of the pepper family, grows in the wild now and is also cultivated increasily throughout the Pacific Islands, where it is called Kava or Kava Kava. This plant grows well at low elevations where there is constant moisture and partial sun. More than a dozen varieties of `awa were known in old Hawai`i.

The sparingly branched, erect shrub is very hardy and grows up to 12 feet high. It has large, smooth, heart-shaped leaves and green or black jointed stems, with swellings at the joint. The black `awa is the rare one. The flower is an inconspicuous narrow yellow-green spike. The root is thick, soft wooded when fresh, hardening as it dries. It needs to grow for 2 to 3 years minimum to achieve usable potency. It is valued as an intoxicating drink and as a medicine. `Awa is also a sedative, used as a sacred plant for prayer, as well as appreciated for pleasure, especially in the south Pacific islands. It assists in opening communication channels with others and with the elements.

As a medicine, the roots - as well as the leaves, stems and bark - are used for the following: general debility, weary muscles, chills, colds, headaches, lung and other respiratory diseases such as asthma, displacement of the womb, diabetes, congestion of the urinary tract as well as for rheumatism.

To make feverish or restless young children go to sleep, the leaf buds are given to the child after being chewed by the mother. The plant is also used during teething and in rituals at the time of weaning. 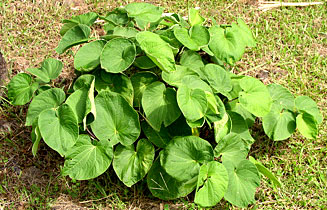 `Awa is used principally as a sedative to induce relaxation and sleep, especially when combined with lomi lomi massage. It is also used as a tonic when people feel weak, as it is stimulating and refreshing, unless drunk in large quantities. Over indulgence in `awa use for a period of time can adversely (but temporarily) affect the skin and eyes. The word `awa means bitter.

In the old days, it is said that the chiefs and priests were the principal users of `awa, but in more recent times it has been taken to use by all the people. Those who perform strenuous work especially appreciate its properties as a relief for stiffness, tenseness and fatigue in the muscles. `Awa is a muscle relaxant to weary farmers, fishermen, hunters and paddlers. Spiritual leaders use `awa ceremonially at appointed times, such as at a ritual following a canoe race-meet. It is a social tradition and an offering of gratitude to the divine, both before and after events and festivals in the life of the people.

In a story about the daughters of Haumea, the eldest being Pele, and her family's travels from Tahiti to Hawai`i Nei, throughout the islands, ending in Hawai`i Island where she resides now, there is a chant given, which was chanted upon making an offering of pig and `awa to Laka, the goddess of hula, to receive instruction. The last lines of the translation are:

...Low
accessible is the day whereby knowledge is gained,
Knowledge from the source, knowledge by hearing,
Like the flourishing `awa plant is the knowledge of the gods,
O hear me.

While living in Western Samoa, I learned that the chiefs and talking chiefs use `awa ceremonially. These villagers on the island of Savaii met together periodically to decide the issues of the village. The meetings were preceded by an `awa ceremony, bringing the leaders into one accord and goodwill, as they sat in a decision making circle around the fale.

To prepare the 'awa root, it is sometimes used fresh, sometimes sun-dried. It is washed clean, chopped into small pieces, and then pounded — or in modern times, blended in a blender — with water to create a suspension of kavalactones, which are lipid-soluble. Traditionally, the root pieces were chewed, usually by a young maiden. Now powdered and packaged root is often available.

An `awa drink, good for migraines or P.M.S. can be prepared for one's personal use in the following way. Put a few small pieces of the clean root in the mouth and chew them. Add a few more, until a cud the size of the thumb is formed. When three of these are ready, put them in a bowl and mash with about a cup of fresh water. Strain the liquid through a cloth to remove woody material. This will provide you with a drink that can be used for headaches or cramps. Sugar cane juice or honey can be added to sweeten. Sometimes a spoonful of noni juice is added as a chaser, to counter any unpleasant effects.

In the traditional manner, the chewed `awa is mixed with water or with coconut water, sometimes warmed by putting it in a kanoa, calabash, with hot stones. It is then stirred and strained with a fibrous plant bundle and drunk when it is cool.

Special cups (`apu `awa), made from coconut shell cut lengthwise are often reserved for this brew, and for the ceremony of `awa drinking. Distinctive bowls are also made and set aside for `awa ceremonies throughout Polynesia. `Awa/kava seems to be more widely used outside these Hawai`i islands.

When `awa cups are filled, a prayer of gratitude is offered. `Awa is usually gulped rather than sipped, with some of the liquid being left in the container and poured upon the earth, with thanksgiving. A chaser or pupu is sometimes used to offset the bitter taste: a piece of sugar cane, a bite of sweet potato, banana or fish. A numbness in the mouth may be noticed after `awa ingestion.

It is best to harvest the `awa root when the ground is moist from rain, so that it can be easily removed. For propagation, the stalk can be cut into sections that include the top of one knob and the bottom of the next one down. These can be planted right side up, with most of the cane being beneath the moist earth, in a shady place. Another method of planting is to lay a long piece of stem within the earth, allowing several plants to sprout from the knobby sections laid down.

See the following pages for more about this special plant: